Gita is our volunteer and she looks after Ashish. Ashish is a little boy with Autism. He used to stay at home and he was not welcomed at the preschool. His parents found it difficult to care for Ashish. Our volunteer, herself a girl with disability, has been to help Ashish to learn to speak and interact with other kids. The parents have come to really appreciate and care for Ashish however the local preschool would not admit him. The volunteer began talked with the Angawadi teacher and tried to change her attitude and to admit Ashish. From the trainings we had given the volunteer she was aware that Ashish had a

right to attend school under Indian law. She told the head mistress this. She also tried to help the head mistress empathise with Ashish and his family?”You have kids. Just think if your child had a similar problem? Think how hard it already is… and then the schools will not even accept your child.How would you feel? This cuts to the core of what our Samvedna program is all about (Samvedna is Hindi for empathy)!.The head has now accepted Ashish at the preschool and he doing well.Our volunteer plans to go along with him to make sure that his learning needs are catered for.

“REDEFINING-BEAUTY”- A PHOTOGRAPHER’S MISSION IN SPREADING THE BEAUTY….
Here’s to people like him and may there be many more…
For those of us who have the privilege to know these people with differences, we have been enabled to see…But for those still unable to see, may this photographer open a whole new world!
http://www.lifesitenews.com/news/redefining-beauty-one-photographers-mission-to-spread-the-beauty-of-people/

THE SIGNS ARE OMINOUS The Hindu Editorial 27 July 2013
The Indira Gandhi National Open University (IGNOU) cannot hold the prospects of the country’s hearing impaired ransom to the whims of a single individual head of institution. In a patently regressive move, the premier university has recently decided to shut down the Indian Sign Language Research and Training Center(ISLRTC) from the current academic year, despite the growing emphasis on signing as a language to bridge the communication barrier between the deaf and the hearing.
Ironically though, it was IGNOU that took the pioneering initiative to start a Bachelor of Arts degree in sign language in 2009, in collaboration with the University of Central Lancashire in the United Kingdom. It was this program that prompted the Union Human Resource Development (HRD) and Social Justice and Empowerment (SJE) ministries to involve IGNOU in the establishment of the ISLRTC on its campus in 2011. This was the very Center for which a huge headline-grabbing outlay was announced in the 2010 Union budget. Beyond the fanfare, the Finance Minister’s statement raised hopes that the government was at last acting on a promise, contained in the 11th Plan document, to set up a nodal center to standardize Indian sign language and train a large number of people in it. But suddenly, the larger objective of bringing the hearing impaired into the national mainstream seems in danger of being ignored.
The factors that appear to have influenced the current deplorable move are not particularly clear. But the Vice Chancellor’s reasoning that a dual degree course was not conceived under the IGNOU Act does not stand up to scrutiny considering that the conception of new program and alterations to existing ones are well within the powers of the academic council. Nor is it the case that open and distance education preclude teaching and learning face-to-face.Admissions for the sign language course have been frozen since last year and the first batch of students on the verge of completing their degree face the unsavory prospect of being awarded a mere certificate.
IGNOU’s ham-handed approach betrays the precarious situation that prevails in India as regards the welfare of people with disabilities. The SJE and HRD ministries should intervene expeditiously to ensure the resumption of academic activity at the sign language center. They should also strive towards according sign language the status of an official language, promote education of the hearing impaired in that medium and establish appropriate interpretation services. Each one of these is consistent with the mandate of the United Nations Convention on the Rights of Persons with Disabilities, which the government has already ratified

The theme for the contest is ” THE JOY IN DISABILITY ” – Having eyes that see…..
helping those with obvious disabilities to look beyond the challenges of those with disabilities and to celebrate their lives.
cash prizes will be awarded to the first 3 winners at the RGB-2013.
RULES FOR THE CONTEST
* Every EHA employee is eligible.
* Only one entry will be accepted per person. The entry must be the original work of the sender.
* Photographs may be taken of individuals or group of people with disability. (any disability)
* Any photo which shows disrespect to the people with disability will be disqualified.
* Photographs must be taken only with the permission of the person being photographed.
* The resolution of the photograph must not be less than 300 dpi.
* The entry must consist of a photograph and a title describing the photo. the title can be in English or Hindi.
* The photographs should be submitted as a soft copy email attachment to the email:jubin@eha-health.org.
* If the entries exceeds 30, a panel of Non-EHA judges will select the best 30 entries that will be displayed in the exhibition at RGB.

At the Dehradun reporting meeting… Hey everyone, don’t we rock? 😉

This morning’s devotion left a word echoing in my heart – ‘blessed’.
Max Lucado called it ‘sacred delight’.
Delight because it is a life held together by joy. Sacred because He does the holding together (Col 1:17).
A life of sacred delight…
delight in the difficult places we live in and work in,
delight in helplessness of apparently unchanging circumstances,
delight in the weariness that comes following the giving,
delight in the midst of heartache of those we are involved with walking away,
delight in the daily-ness of everyday.
We delight in all these situations not because we are masochistic
but because we delight in the Lord,
the El-Shaddai God who is sufficient in all these situations;
into my not-enough-ness, the God-who-is-enough speaks.
As we go back to our project areas after four days of having ‘come apart’,
we choose to go back because of joy…
for the joy set before us…
And this is sacred because this joy is given.
Sacred delight!

Different projects; different target areas; different groups of people that we work with.
And yet, we are more alike than different.
For the Author of our stories is the same.
I was reminded of this as I sat back and listened to people presenting their reports at the annual reporting meeting in Patna for all the community development projects from the North-east and central regions.
What was even more awesome was that from just two projects that would talk about disability and ask questions of one another, we have grown in number. We talk the ‘disability-talk’ and can actually understand one another 🙂 ! We have begun to hold each other accountable to include people with disabilities. We have come a LONG way!
And just in case you wondered, the picture is a group of us showing off our ‘disability’ T-shirts!!! 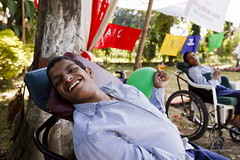 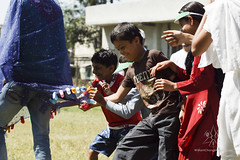 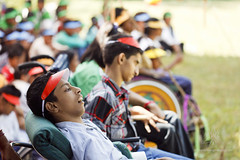 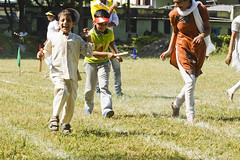 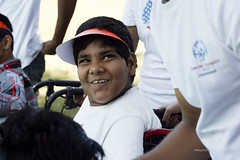 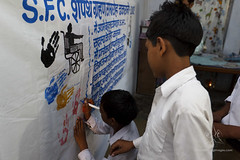 glorious & growing
Create a free website or blog at WordPress.com.